As Pebblebrook Hotel Trust sets its sights on another year of spending millions to renovate and reposition hotels in its portfolio to meet guest demand, the company is continuing to explore the alternative-accommodations space.

The hotel real estate investment trust’s capital expenditure plan for 2022 calls for between $100 million and $120 million to reinvest in some of the hotels and resorts in its portfolio. Within that program is about $10 million to $12 million for its Skamania Lodge near the Columbia River Gorge in Stevenson, Washington, for three new treehouses, glamping units, a multiple-bedroom villa and a pavilion.

That’s in addition to the six existing treehouses on the property, and Pebblebrook has additional alternative accommodations for the lodge in the works as well.

The concept of adding treehouses and other alternative accommodations to its properties connects to how Pebblebrook has been evolving the hospitality it offers guests, Pebblebrook President, CEO and Chairman Jon Bortz said.

“We’re following the customer and the whole idea of experiential travel, which is why we have so many independent, unique experiential properties,” he said.

The company has transformed its resort properties from traditional golf and spa resorts into more active resort properties, he said. Consumers have reprioritized their spending over the years, and many are finding that collecting experiences is more interesting than collecting things.

“The internet has created an opportunity where you can share your experiences, and I think that helps promote the desire to have experiences,” he said.

Providing more experiential stays is the direction Pebblebrook is heading, Bortz said. Those efforts will go beyond just the accommodations and resorts as it includes more experiential activities, including its urban properties. Cruise lines do something similar with their excursions, allowing guests to get off the ship and go do something unique and take pictures and then talk about it when they return home.

“People want to have fun, and they want to do something new, and that’s what life’s all about,” he said.

Skamania Lodge was built as a conference center when large corporations would hold off-site training sessions on a regular basis, Bortz said. As more training moved online over the last 10 to 12 years, Pebblebrook has transformed the property into a more leisure-focused, experiential resort.

The property has a couple hundred acres of land with a nine-hole golf course, an 18-hole putting course, a spa, an indoor/outdoor pool, a zip line, a rope course and ax-throwing, among other offerings.

Pebblebrook started adding treehouses about five or six years ago, starting with two and waiting to see guest reaction before building more, he said. The property added another four, and a further three are planned for this year. The treehouses, essentially elevated cabins built among the trees, are about 150 to 200 feet from the lodge.

The first two treehouses built have one bedroom with a king bed while the other four have a king bed with a queen bed in an adjacent “nook” that has windows on three sides for viewing and tented drapes to separate from the main bedroom. Each treehouse has full bathrooms with walk-in showers, outdoor wooden decks and indoor/outdoor fireplaces. The last four built also have their own private firepits.

Guest response “was overwhelming,” he said, adding that treehouse occupancy is higher than the lodge occupancy year-round.

Pebblebrook has laid out plans for an additional 200 units around Skamania’s property, Bortz said. Along with the three new treehouses, the lodge will gain five glamping units, a site for luxury recreation vehicles, cabins, teepees, villas and farmhouses.

The tents for the glamping sites will be on a platform and have a full bedroom with furniture, individual bathrooms and fireplaces, he said. The plan is to add the glamping units this year.

The luxury RV site will have about 60 to 70 spaces available for guests to park and hook up their RVs, he said. The luxury part mainly comes from the type of RVs the guests drive, but the site will have access to the lodge’s activities. Guests may even choose to leave their RVs parked at the site but stay in the lodge itself.

“They’re not lost in America, they’re just going away for a weekend in their RV, so it’s not much different than a hotel, and that would be the same for the glamping,” he said.

The villa planned for construction this year will have four bedrooms built off of a main building that will allow the lodge to book them as a four-bedroom villa as well as selling them as individual units similar to hotel rooms, he said. The lodge will likely book them on a weekly basis instead of nightly.

The farmhouses will have small plots for growing vegetables and fruits that the lodge can use in its restaurants.

Because of the ongoing disruption to supply chains, Pebblebrook is planning its projects much further in advance than before, Bortz said. The lead times are almost double what they were before the pandemic. Costs have also increased significantly. When building the first two treehouses, the cost was about $500,000 to $600,00 per unit, including the cost of running utilities out into the woods.

“Now we’re looking at $1 million to $1.1 million a unit for the treehouses that we’re doing five years later,” he said. “It’s pretty much doubled in the last five years.”

Serving guests staying in a treehouse isn’t much different than serving them in a traditional hotel setting, said Ken Daugherty, general manager at Skamania Lodge. Guests check in at the hotel and then drive to their treehouse’s parking space before taking a trail up to their house.

Guests who book a stay at Skamania’s treehouses are looking for an experience that gives them a private space away from other people, he said. They can feel they’re out in nature while they enjoy a glass of wine while sitting by the fire. At the same time, the treehouses aren’t so far away from the main hotel that they can’t use the other amenities available.

As pandemic-related restrictions ease and guests become more comfortable around others, treehouse guests are requesting less in-room dining and take out, instead opting to go to the hotel’s dining spaces, he said.

Guests in the treehouses can receive daily housekeeping if they request it, he said. While treehouses are more difficult to clean and take more time than a hotel room when considering the outdoor spaces and larger bathrooms, the hotel staff make it a little easier by driving over a cart with the supplies the housekeepers need.

“We want to make sure they’re able to just really focus on what they do,” he said.

While it depends on the season, the treehouses can book out 120 days or more in advance, Daugherty said. Occupancy runs at just less than 80% on average. That popularity among guests is why Pebblebrook is adding another three treehouses and more alternative accommodations to the property.

When planning out operations for these new accommodations, Daugherty said the Skamania Lodge team has learned from serving guests in the treehouses. The glamping site will be close to the treehouses but just over a hill to maintain privacy. Property employees are learning how best to clean the tent units, but for the most part, it’s similar to cleaning a hotel room.

“It’s going to be very important that we have a camp host, somebody that’s there during the day greeting guests, talking to them and getting them the things that they need,” he said.

The luxury RV site will have access from the hotel’s main drive, he said. The site is surrounded by tall trees and offer great amenities, including RV hookups, television and Wi-Fi. The site is located near the hotel’s nine-hole golf course, 18-hole putting course, disc golf course and ax-throwing area.

Skamania Lodge is Pebblebrook’s first property where it has built treehouses with plans to add more alternative accommodations, but the REIT has similar plans for a few other hotels in its portfolio as well, Bortz said.

The company’s Chaminade Resort & Spa in Santa Cruz, California, was built as a conference center and has about 300 acres, he said. The company has a master plan for the property that includes treehouses, cabins, villas and glamping units. The resort also has redwoods on its property, so the master plan also includes a wedding venue among the trees. There will also be biking trails around the property as well as a zip line.

Pebblebrook intends to convert its Paradise Point Resort & Spa in San Diego into a Margaritaville in the near future, he said. The company intends to add six or eight Airstream trailers to the property. The trailers would be fitted with a bathroom and bedroom.

“People find those fascinating,” he said. “The Autocamp folks are doing those, so that’s also something that’s been incredibly popular, and we will look for opportunities to do that.”

As for whether Pebblebrook may acquire other alternative-accommodation properties or companies, Bortz said the team has an open mind.

“The world evolves, and consumer tastes and desires evolve,” he said. “I think we have to evolve with it.”

The idea of having a stand-alone alternative-accommodation property is certainly a possibility as the company learns more about them and gains experience, Bortz said. What hotels do and what companies such as Airbnb do are melding together, and the line between the two continues to blur, he said.

As Pebblebrook adds cabins or villas, it may decide they can only be reserved on a weekly or monthly basis, becoming more like a vacation rental than a typical hotel, he said.

“We just have to see what the customer is looking for, and as the customer evolves and expresses their desires from a demand perspective and a product and service perspective, we’re going to go with it,” he said. “The best way to do that is to experiment.”

Bortz said Pebblebrook increasingly wants to buy properties that have extra land where it can add villas, cabins, treehouses and other accommodations to go along with the hotel.

“It’s a different rental stream, if you will, sure, and may very well be a different customer,” he said.

Tue Apr 12 , 2022
At a certain point in every relationship, dollar pizza date nights just don’t cut it anymore. You’ve got to step up your game, and what better way to do that than get the hell out of town? Weekend trips are great, but they can also be a hassle to plan. […] 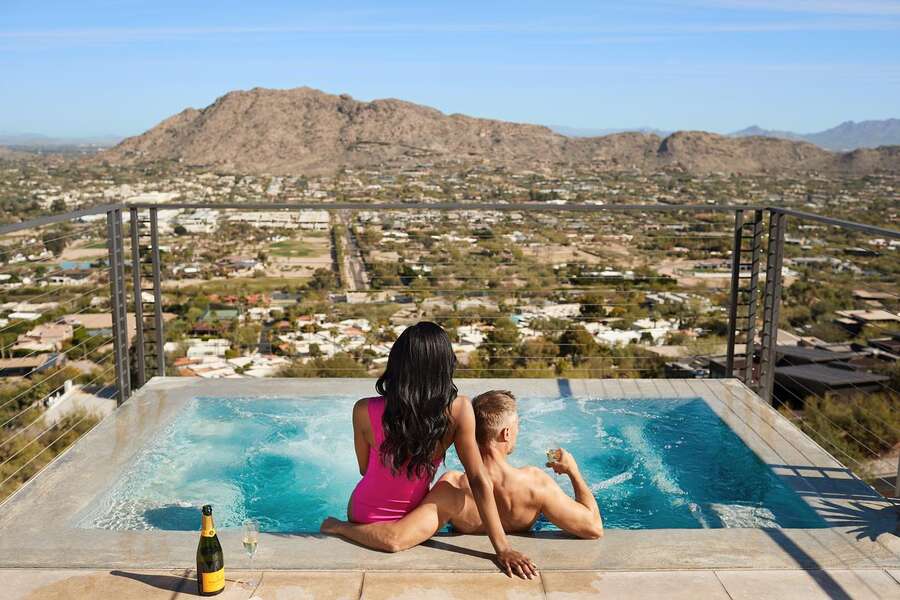