Thanks for signing up!

Access your favorite topics in a personalized feed while you’re on the go.

The pandemic was a boon for the already well-off, with the top 1% of Americans adding around $4 trillion to their wealth in 2020. It’s no wonder, then, that many of the financially elite are undeterred in their spending on high-flying opportunities even as a recession threatens the economy.

These well-off wanderlusters have helped create a travel-industry boom, with pent-up demand pushing bucket-list travel into this year’s shoulder seasons. The most spendy of globetrotters are going all out — perhaps even more than usual — to ensure an unforgettable holiday.

Take one East Coast big spender who flew 20 of his closest friends to Rock House, a $655-plus-per-night hotel in the Caribbean island chain Turks and Caicos, for an all-expenses-paid long weekend over the summer. Throughout the four days, top-shelf liquor and $600 bottles of wine flowed freely. He paid $120,000 to the resort alone, said Nikheel Advani, the COO of Rock House’s owner, Grace Bay Resorts.

Then there’s the man who, as an anniversary surprise for his wife, planned to book a private palazzo in Venice for a performance by opera legend Andrea Bocelli at the cost of about $300,000 for a half hour, and then jet to the Dolomite mountains for a romantic picnic. (The grand plans were foiled by a bout of COVID-19, said the trip’s organizer, Jules Maury, who works for Scott Dunn Private, an ultra-exclusive, invite-only arm of a United Kingdom-based luxury-travel company.)

American Express Travel’s 2022 Global Travel Trends report, which used polling data collected in early February 2022, confirms the move toward bucket-list travel this year. Of the 3,000 people polled, 86% expected to spend more or the same amount on travel in 2022 as they did in a typical year before the pandemic, and 65% of respondents said they’d rather take a dream vacation than purchase a new car.

An August report by the luxury-travel-agent network Virtuoso found that future sales of travel are running 47% higher than in 2019.

Luxury-travel planners shared the receipts to prove how globetrotters are spending big despite uncertain economic times.

Maury said she’s seen an uptick in clients wanting to go the extra mile in their travels.

It’s now “‘I want to go to Rwanda to see the gorillas,’ whereas it might have been before, ‘We’re gonna go to Kenya or Botswana.’ Let’s take it one step further,” she said, adding that seeing the gorillas in Rwanda is “the ultimate safari.” The trip can cost upward of $15,000 per person, according to the travel site Afar.

Karen Loftus, of Women’s Adventure Travels, said she’s also seen an uptick in interest in Rwanda safaris. She’s arranged trips at a lodge called Kataza House, run by the conservation-focused safari operator Singita, where prices start at $13,600 a night for five to eight guests. A stay at Singita’s Serengeti House starts at $16,051 and tops out around $22,500 a night for five to eight guests. The price doesn’t include the $1,500-per-person, per-day permit to trek into Volcanoes National Park to actually view the gorillas.

Nature-spotting has been a big travel motivator lately. Maury said that she’s had an increase in requests for trips to the Galapagos Islands, where the unique wildlife includes giant tortoises and 13 species of finches; to Brazil’s Pantanal wetland region, famous for its jaguars; and to Greenland to see polar bears.

Clients are “adding a bit more dream factor” to their travels, Maury said.

Remoteness is the ultimate luxury

Maury and Loftus have both seen an uptick in interest in trips that let their clients get away from the stressors of modern life.

Maury has arranged visits to the Kitchen on the Edge of the World, a foodie pilgrimage to the Arctic Circle that features a rotating cast of the world’s top chefs, like the seafood expert Rick Stein and the Michelin-star-holding Basque chef Nieves Barragán Mohacho, that books up many months in advance. Only 20 people can attend each chef’s limited run, with tickets costing $5,400 and up per person for the four-day experience. That doesn’t include flights to Holmen Lofoten in northern Norway.

Loftus sees high-net-worth individuals’ desire to be “catered to in the middle of nowhere” as a trend accelerated by the pandemic, as well as a reflection of the personalities of this class of travelers.

“High-net-worth people are typically high achievers,” Loftus said. “You go to these amazing places and you achieve something you never imagined was possible.”

She added that more involved excursions like hiking in a remote corner of the world “lends itself to some really great bragging rights.”

Quality time with loved ones matters above all

But not all bucket-list travel experiences need to be in far-flung corners of the world. Spending quality time with family is still the No. 1 priority in luxury travel, according to a March 2022 Deloitte poll cited by Berkshire Hathaway.

In August, Bill Finnegan, a mergers-and-acquisitions lawyer who lives in Houston, took his son, son-in-law, and nephew to golf at Pebble Beach, a picturesque public course on the outskirts of Carmel-by-the-Sea, California.

The trip was arranged by the private vacation club Exclusive Resorts. Finnegan estimates he pays about $45,000 a year for 30 days of travel at the vacation club’s qualifying properties.

The trip served as bonding time for the group and put Finnegan’s son one notch closer to reaching his goal of teeing up at Pebble Beach 20 times in his life.

“For me, it was a bucket-list trip not only for the destination, which was incredible, but being able to do it with my son, son-in-law, and nephew — just the whole experience,” Finnegan said.

West Coast is the Best Coast: Golf Travel to Canada

Fri Nov 4 , 2022
Travelling to Canada for golf has never been easier – or more affordable – and with plenty of options from coast-to-coast, it’s an easy destination to consider for your next golf trip.  A quick flight from almost all of the major cities in the United States, and a straightforward enough […] 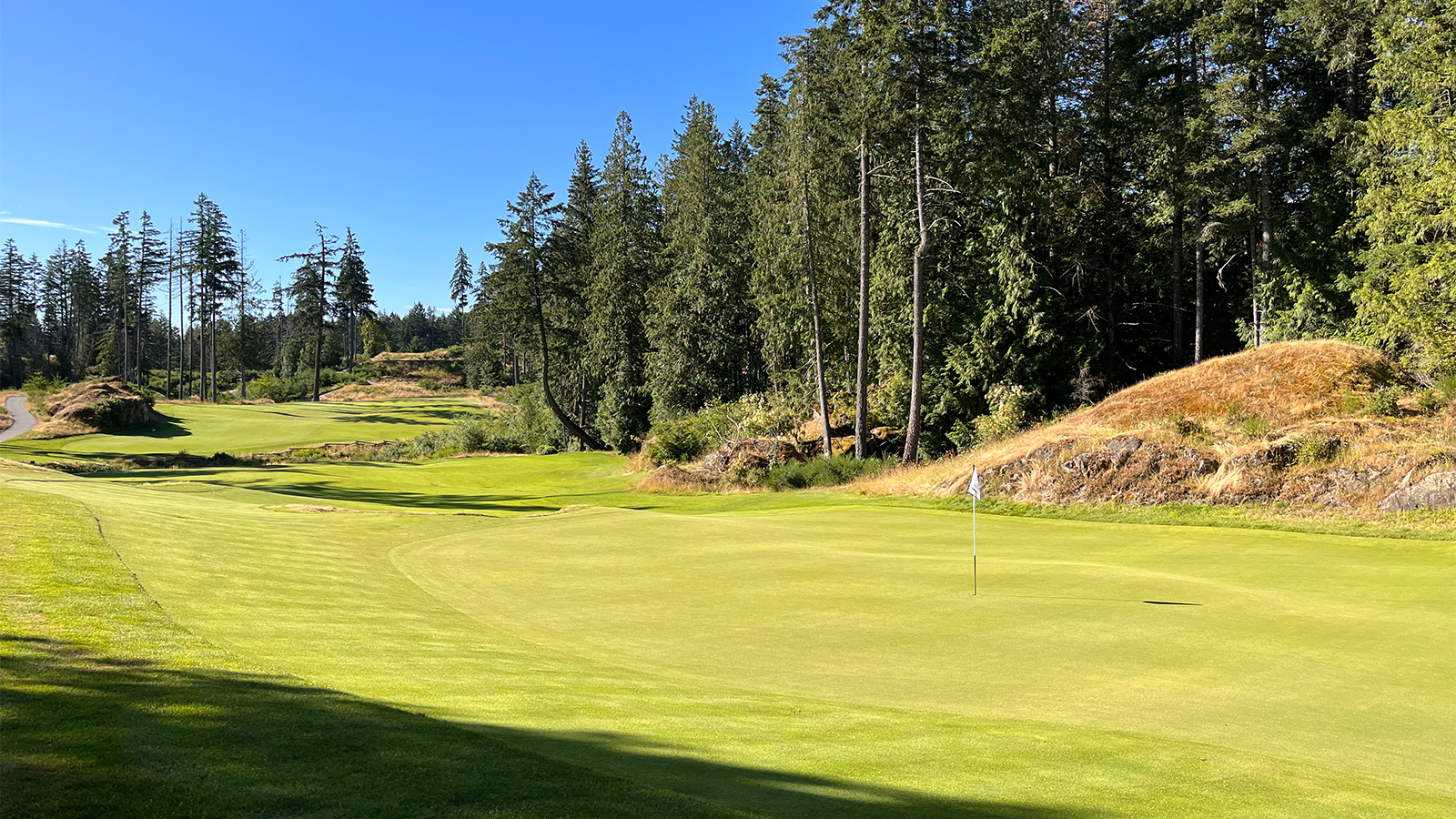