Converting a century-old, grand bathhouse into Superior Bathhouse Brewery was not easy, but Schweikhart like the city itself has been successful at changing. The brewery and city developed to meet the evolving tastes of generations of people who come to this intriguing destination.

Madden’s No. 1, one of 18 beers brewed at Superior, is named after Owney “The Killer” Madden, a gangster, who fled New York in 1935 to settle here. Locals like to say those were the days when Hot Springs was Las Vegas before Las Vegas.

Gangsters like Lucky Luciano and Al Capone visited. So did movie stars like Mae West and George Raft.

Major League baseball teams started bringing their players in the preseason at the turn of the 20th century for a combination of thermal bath treatments and spring training. Honus Wagner, Cy Young and Babe Ruth were among the many greats who played here, as did Josh Gibson, Satchel Paige and Cool Papa Bell. The Negro League set up spring training here also.

Everybody liked to party. Gambling, drinking, bootlegging and prostitution flourished.

The Gangster Museum of America tells the story of notorious criminals who lived the high life directly across the street from the wellness spas.

Eight bathhouses line up majestically in a row down Central Avenue much as they did when Capone used to drop by for his thermal bath, but just about everything else in Hot Springs has changed, at least a little.

Although Hot Springs did not become a national park until 1921, the area was set aside as public land — a reservation destination — by President Andrew Jackson in 1832, 40 years before Yellowstone became the first national park and four years before Arkansas became a state. Long ago, Native Americans called the place “Valley of the Vapors” for the steam that rose from its thermal springs.

As he leads tours through Fordyce bathhouse, now a part of the national park, Park Ranger Cane West explains that in the early years, leaders weren’t quite sure of the reservation’s purpose.

At first, the driving concept was to make the reservation a location where Americans could come to get well and learn how to live a healthy lifestyle. By the 1900s, Hot Springs was one of the most visited health and wellness resorts in the United States. In 1947, the peak year, bathers took more than 1 million baths.

West said a new concept developed that Hot Springs would be a place to “teach middle-class America about luxury.” The bathhouses developed into opulent facilities, complete with stained glass windows, marble floors and ornate fountains.

Visitors enjoyed thermal baths and massages, then in the evening took a stroll on the Grand Promenade behind the bathhouses. And, of course, there was the other side of Central Avenue at establishments like the Ohio Club where the party never stopped. “A healthy lifestyle” had a much looser definition on that side of Central.

Today only two of the bathhouses, Buckstaff and Quapaw, are open for the spa treatments. Then there is Superior Bathhouse, the only brewery in the country on national park land. Brewery owner Schweikhart said the thermal springs help in the brewing process because water flows into the pipes at 144 degrees.

The mineral water is also popular with the locals who often stop at public fountains to fill up large plastic jugs to take the water to their homes.

Hot Springs National Park is not just bathhouses. Its 5,550 acres also include more than 20 miles of hiking trails through the Ouachita Mountains. Fishing, camping and bird watching are also popular. Visitors can see expansive views of the national park and rugged Ouachita Mountains from atop the 216-foot Hot Springs Mountain Tower.

In keeping with the city’s legacy of health and fitness, local leaders developed its own Northwoods Trail system of hiking and biking paths.

“It’s a remote feeling out here,” says Northwoods Trail Coordinator Traci Berry as she pedals up a mild incline on her bike, “but we are only five minutes from downtown.”

The 26 miles of Northwood trails, some for mountain bikers only, some for hikers and bikers, are well maintained and designed for a range of skill levels. They wind up and around the Zig Zag Mountains taking in views of three mountain lakes along the way. The Northwoods network hooks up with Garland County’s 10-mile Cedar Glades trail system and even adds an eighth of a mile of trail in the national park.

These trails showcase the Diamond Lakes region, an area known for its acclaimed fishing, boating and other recreational activities.

On a peninsula jutting into Lake Hamilton, the University of Arkansas’ Garvan Woodland Gardens displays an abundance of flora and fauna. The 219-acre property offers 128 species of ornamental and native shrubs and wildflowers and 160 different types of azaleas. Also, it features a sensory garden, fern glade and bird sanctuary, home to 70 species. Peacocks strut in the Asian Garden, and children delight in their own adventure area. For many people, architectural treasures tucked in the pines are reason to visit. The six-story-tall Anthony Chapel sprouts from a hillside and welcomes nature through floor-to-ceiling glass walls and skylights. The whimsical Tree House, which costs $1 million, elevates visitors into a pine and oak canopy. Four levels represent different parts of a tree.

Some people like digging in the dirt, especially when they might uncover quartz crystals. That is how it’s done at Avant Mining, which set up public digging at Fisher Mountain’s Ocus Stanley Claim, in operation since 1946.

The mine is not in a cave, as often depicted. Quartz crystal seams run along the red-dirt slopes. Discovering small treasures is a fairly easy task. Almost everyone comes away with sparkling trinkets, and lucky ones find crystal clusters. A display in a store at the site’s entrance shows crystals weighing hundreds of pounds.

“We are known to have the best crystals in the world,” says owner James Zigras, mentioning its world-class specimens are held by the Smithsonian’s American Museum of Natural History and other national museums.

President Bill Clinton, who attended Hot Springs High School, remains a big fan of McClard’s Bar-B-Q. He found a way to stay connected during his White House years. Scott McClard tells of providing meals for the president on Air Force One. McClard is the fourth generation of his family to run the restaurant business, which goes back to 1928. The little white restaurant with red awnings and neon lights drawn patrons far and wide for ribs, beef and pork, plus spicy tamales and smoked sausage.

Anthony Valinoti learned to prepare Italian foods on an extended visit to Italy and brought this expertise to Hot Springs at DeLuca’s Pizzeria, where the really tough decision is choosing between one of his flavorful pizzas or amazing, thick hamburgers.

“Cooking from scratch” and a down-home atmosphere are the draws at The Pancake Shop, a family-owned eatery since 1940. All foods and drinks at Kollective Tea + Coffee are made with certified organic or natural products.

The Avenue, a fine-dining restaurant at The Waters Hotel, boasts prime viewing for the comings and goings of Central Avenue. The hotel’s Rooftop Bar is the place to be seen on warm evenings. Al Capone and Lucky Luciano would fit right in these days at the Ohio Club because their beloved speakeasy retains the feel of the 1920s.

The Reserve, a boutique bed-and-breakfast inn on the doorstep of downtown, offers relaxation in grand style. Mark McMurry, who owns the house with his wife, Rhonda, said they grew bored with retirement and purchased the historic W.C. Brown house. More than $2 million and two years of work have turned the National Register of Historic Places structure into luxury lodging. From its upper porch, guests can sip mint julips while watching thoroughbred racing at Oaklawn racetrack.

Horses have run at the track since 1905. Today the oval is part of an entertainment complex that includes a casino and 198-room hotel called the Oaklawn Racing Casino Resort.

Tue May 3 , 2022
Brace for the new Ice Breaker, with a 93-foot spike and the steepest beyond vertical drop in the state. (COURTESY SEAWORLD ORLANDO) SeaWorld splashes into 2022 with two new rides and the return of their well-loved special events.For starters, the highly anticipated new coaster dubbed Ice Breaker opened in February, […] 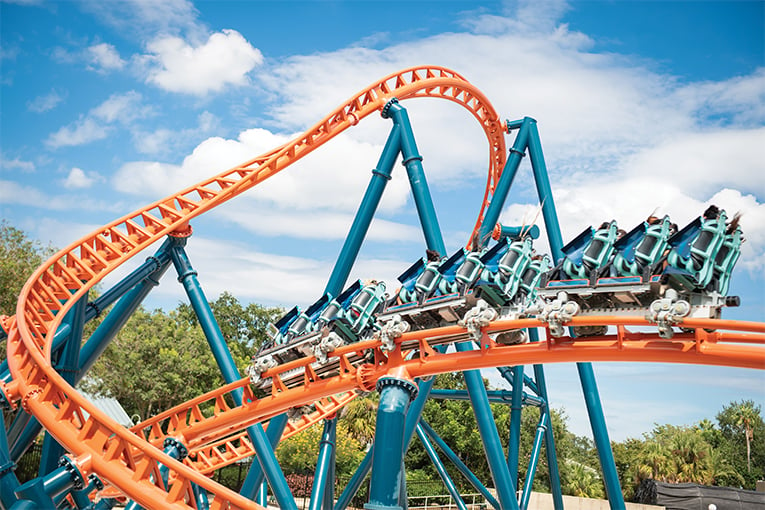