TAMPA, Fla. — Some players on the Mets and Yankees may be unable to play in New York when the 2022 Major League Baseball season begins next month because of a city vaccination mandate.

Under a New York City regulation enacted on Dec. 27, people who perform in-person work or interact with the public in the course of business must show proof that “they have received a COVID-19 vaccine.” The proof of vaccination must show that a worker is fully vaccinated, has received a single-dose vaccine or, if only the first shot of a two-dose vaccine has been administered, then there must be evidence of a plan to receive the second dose within 45 days of the first.

While Mayor Eric Adams loosened some vaccine requirements this month, he left in place the private-sector mandate. According to the mayor’s office, the regulation applies to the Mets and Yankees, whose home stadiums are Citi Field in Queens and Yankee Stadium in the Bronx.

The Yankees open the season on April 7 with a home game against the Boston Red Sox. The Mets’ home opener is against the Arizona Diamondbacks on April 15. With those games several weeks away, the mayor’s office said it couldn’t predict if circumstances could change in the intervening period.

The mandate has been a point of contention for Nets guard Kyrie Irving and the N.B.A. Irving has played in only 19 of the team’s 69 games in part because he is unvaccinated against Covid-19 and the regulation has barred him from playing home games. Irving is allowed to play in road games where cities do not have vaccine mandates. He set a single-game franchise record with 60 points in a 150-108 win against Orlando on Tuesday, but he will not be eligible to play the Nets’ next three games.

(The private sector mandate grants an exception for visiting professional athletes and anyone who accompanies them, along with performing artists and college athletes.)

On Monday, the N.B.A. fined the Nets $50,000 for allowing Irving to enter the team’s locker room during Sunday’s game against the Knicks. While he was allowed at the game, he was not allowed to be in team facilities at Barclays Center in Brooklyn.

If the city mandate doesn’t change by the first home games for the M.L.B. teams, it would presumably affect the Mets more than it would the Yankees.

Asked on Tuesday if he was vaccinated, given the city’s mandate, Yankees outfielder Aaron Judge said, “I’m so focused on just getting these first games of spring training so I think we’ll cross that bridge when the times comes. But right now, so many things could change. So I’m not really too worried about that right now.”

Judge was placed on the league’s Covid-19 related injured list after attending the 2021 All-Star Game in July in Denver and testing positive for the coronavirus. He proceeded to miss nine games. Because of other positive cases, potential exposures and testing, the league postponed the Yankees’ first game back from the All-Star break, on July 15 against Boston, which had not reached the vaccination threshold.

The Red Sox, who had a significant virus outbreak last season, were the only one of the 10 teams in the postseason last year that had not reached that mark. Since arriving to spring training, Red Sox players such as Xander Bogaerts and Christian Arroyo told reporters they have since been vaccinated.

M.L.B. and the players’ union each declined to comment on Tuesday, as did the Mets.

“On behalf of the Yankees, Randy Levine is working with City Hall and all other appropriate officials on this matter,” a Yankees spokesman said in a statement, referring to the team’s president, a former deputy city mayor. “We will have no further comment at this time.”

Over the weekend, Yankees Manager Aaron Boone told reporters that he was concerned about his players not being able to play in Canada, saying, “We still have a few guys, at least, who are not vaccinated.”

Canadian border restrictions currently do not allow unvaccinated foreign visitors to enter the country without special exemptions. And a special status issued by the Canadian government for unvaccinated athletes, which allowed them to cross last year, ended in January.

As M.L.B. and the union negotiated a new labor agreement, they also agreed that any player who is unable to play in any games as a result of any government regulation because of his vaccination status “may be placed” temporarily on the restricted list, where pay and service time are lost. Service time determines players’ eligibility for salary arbitration and free agency.

The Yankees are in the same division as the Blue Jays and will play nine games in Toronto this season.

Despite initial resistance from many players last year, the vaccination numbers steadily rose in M.L.B. By the end of the season, 88 percent of all players and key staff members were fully vaccinated. Still, some team executives were openly frustrated during the season with their players’ reluctance to be vaccinated.

The vaccination rates are higher in other professional leagues, such as the N.B.A. and the N.H.L., both of which also have teams based in Canada.

Sat Apr 16 , 2022
Groups360 empowers event organizers to book rooms and space in a single transaction on GroupSync™ DALLAS, April 13, 2022 /PRNewswire/ — Omni Hotels & Resorts and Groups360 today announced that Omni is the first ever hotelier to offer instant booking for both group rooms and meeting space on GroupSync™. GroupSync […] 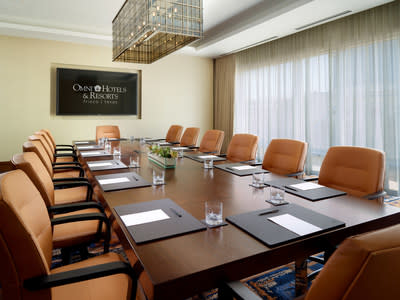