The striking blue waters of the Mediterranean, Ionian, and Aegan Seas have long been a draw for visitors coming to Greece. Luxury hotels, especially, have established a presence here. Consider the intimate Radisson Blu Zaffron Resort Santorini from Athens-based architects Arc-Set, which chose design elements that matched Santorini’s natural beauty, including a lobby outfitted in elegant domes and arches, a nod to Santorini’s architectural vernacular. Homegrown brand Kanava Resorts, helmed by Greek hotelier Kalia Konstantinidou and her husband and business partner, Antonis Eliopoulos, counts four hotels in Santorini and recently broadened its scope to the island of Paros. The waterfront Cosme Hotel will join sister properties the Parīlio and Acron Villas when it opens this year.

Further, Athens-based SWOT Hospitality is adding five new hotels to its roster in 2022: the 59-room, 24-suite Magma Resort Santorini, part of Hyatt’s Unbound Collection; the 200-room Moxy Athens City; the pared-back Yi Mykonos; the Lindian Village Rhodes, spread across 60 acres; and the Monasty, an Autograph Collection by Marriott in Thessaloniki, which will be the first global branded hotel in the center of the northern Greek city when it opens in July. 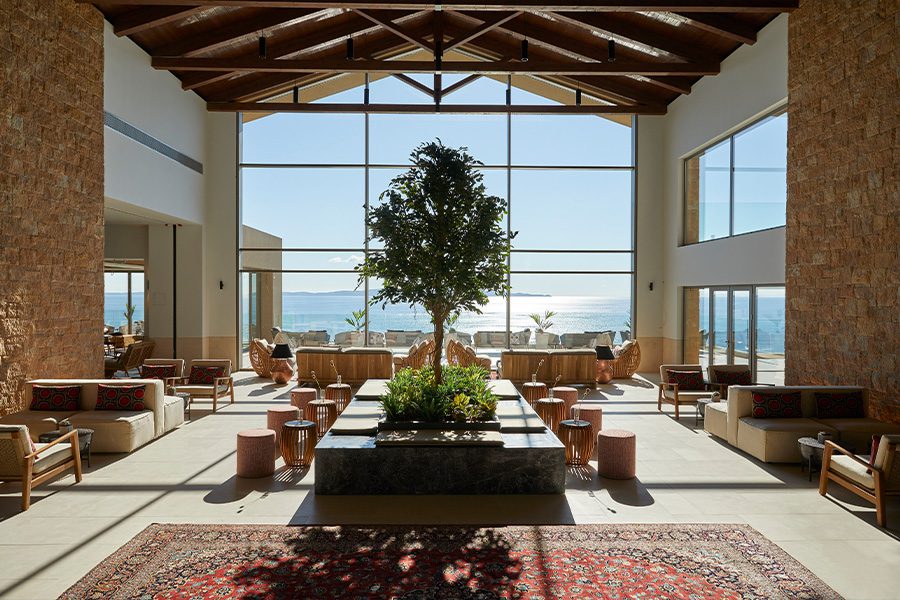 Sweeping views of the Ionian Coast take centerstage in the lobby of the MarBella Elix Hotel, designed by Dimitris Thomopoulos Architects

Known for its sustainable tourism, luxury resort destination Costa Navarino is also on the rise, thanks to the K Studio-designed eco-resort Navarino Bay Hotel, nestled into the landscape. This summer will see the arrival of the W Costa Navarino. Set along 32 beachfront acres, the 246-room resort will boast a sustainably minded design, courtesy of Greek firm Tombazis and Associates and London-based MKV Design. Mandarin Oriental will also plant its flag here in 2023, with the 99-room Mandarin Oriental Costa Navarino.

“This is a pivotal moment for hospitality in Greece,” says Studio Lost founder Constantina Tsoutsikou, who worked on two projects that opened this year in Crete, the Royal Senses Resort & Spa and Numo Ierapetra Beach Resort. “Hoteliers are upping their game, new concepts are being launched, and more luxury propositions are being developed.”

Indeed, Greece is experiencing a new era of luxury, confirmed by the arrival last year of the Kalesma Mykonos—another from Athens firm K Studio, in collaboration with Greek firm Studio Bonarchi—and the MarBella Elix Hotel in Parga, which takes cues “from the breathtaking view of the sea and the surrounding environment,” says Dimitris Thomopoulos, founder of his eponymous Athens-based firm. “Blending the architecture with the landscape while building on a steep-sloped plot was a challenge, but it makes the hotel magical.”

Here, we dive into four properties reinventing luxury in Greece. 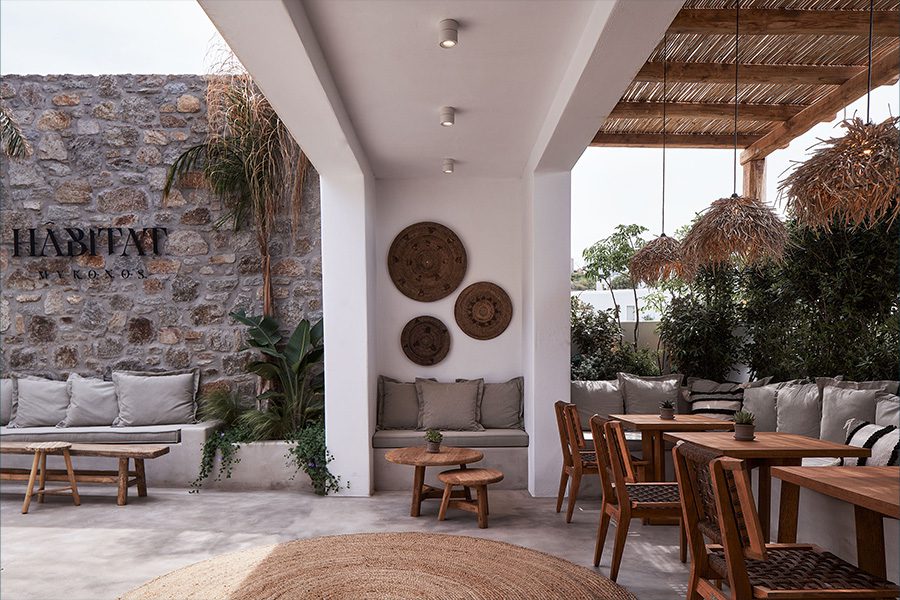 A warm and calm aesthetic defines the Habitat Mykonos, an all-suite hotel crafted by Marousi, Greece-based GNB Architects with interiors from Ioannina firm Vasilis Papadias Design Studio that bond historic and contemporary design vernaculars. “The building is in a traditional settlement of Mykonos. That’s why Cycladic architecture constitutes the basis of inspiration,” Vasilis Papadias says. “I have always been interested in the simplicity of the architectural forms, the holistic yet bespoke design.” Wood, stone, and forged cement compose the modern material palette, while a range of cotton textiles balance the minimalist aesthetic with beige and gray hues. Leather details punctuate interiors along with rocky elements that inject texture into the reception area and 16 guestrooms. Outdoor hubs like the lounge and main pool are also ensconced in vegetation. “We want to ensure a cozy and special space for visitors without exaggeration,” adds Papadias. 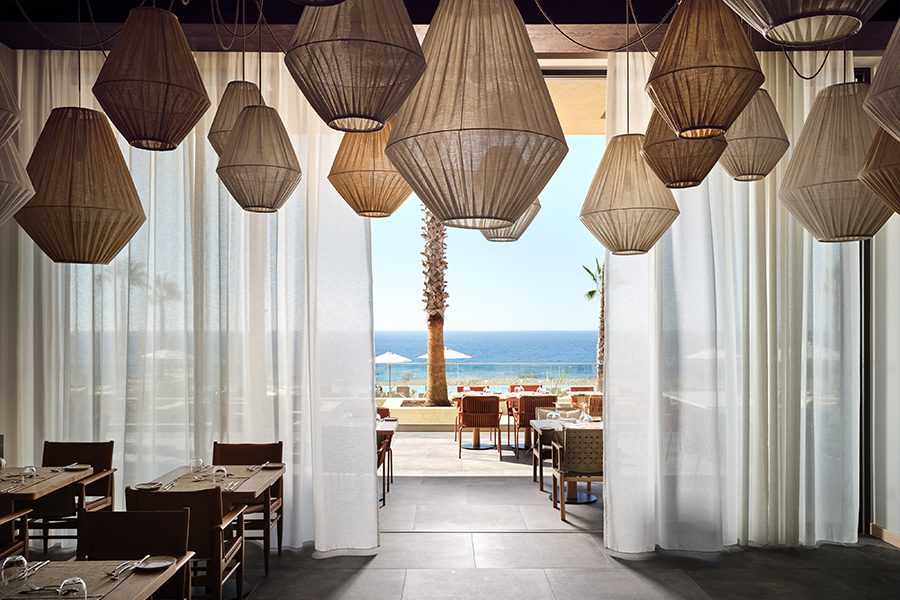 London-based Studio Lost recently masterminded a pair of inviting retreats on the Greek island of Crete, including the 179-room Royal Senses Resort & Spa Crete, a Curio Collection by Hilton hotel that opened last June. Both rustic and tropical, the concept was crafted alongside HBA London and Greek firm Peppas N Architects to serve as an extension of the terrain. “Royal Senses is more refined,” says Studio Lost’s Constantina Tsoutsikou. “There’s a grandeur in the architecture.”

The airy new build reflects its setting with a medley of natural colors like terracotta and rust, as well as brown hues and dark wood that mirror the site’s rich soil. “That was done intentionally to get away from the usual white and blue palette that dominates the island,” Tsoutsikou says. “It looks neutral, but to get that neutrality and the richness and the depth, it has a lot of color in it.” While rough and smooth surfaces capture the untamed nature of Panormos, outdoor areas like the four large communal pools are characterized by a sense of openness that permeates the property. “The Royal Senses is more extroverted,” Tsoutsikou adds. “The way the pools are aligned—it’s across a horizontal axis, so there’s a lot of opportunity to be seen.” 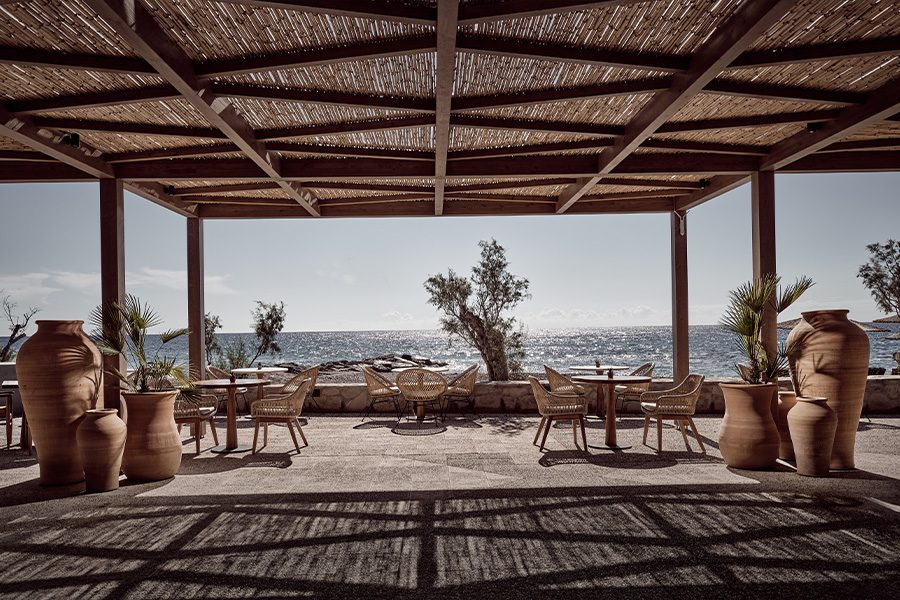 Studio Lost also worked on the Royal Senses’ Cretan neighbor, the 132-room Numo Ierapetra Beach Resort, with similar design principles in mind. “We used the same teams, but the expression’s completely different,” Tsoutsikou says. Opening in July 2021 after a 12-month facelift, Numo is a more “humble and bohemian” counterpoint to the Royal Senses, with a greater emphasis on nature while also maintaining some of its original characteristics, including recycled furniture from the previous owner, says Tsoutsikou. With gray bark and gray-green leaves, the tamarisk trees that line the beach provided the starting point for much of the design. “I pulled up a bit of its branch and some bark from the tree, and I went back to the studio and started thinking about it,” Tsoutsikou says. “It was the beginning of something that became gray, cool, and breezy.”

Perhaps the most distinguishing feature of the retreat is its diverse guestroom configurations, of which there are nearly 60. Some suites combine up to three formerly individual chambers and even include newly created courtyards, while smaller guestroom footprints are exposed to the surrounding nature. “Numo is [about being] yourself and letting your hair down,” Tsoutsikou adds. “It’s a more intimate [experience].” 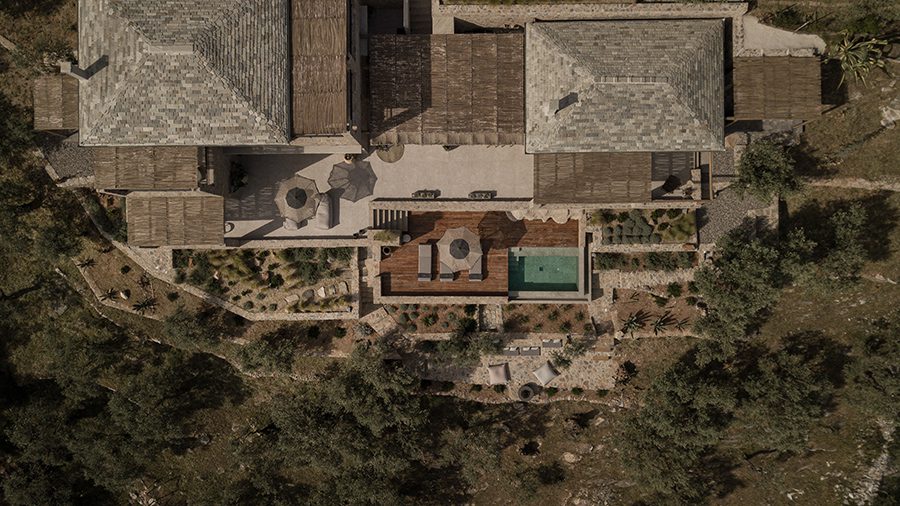 A rarified stretch of olive grove in Pelion is home to Peliva Nature & Suites, a naturalistic getaway overlooking the Pagasitic Gulf. The poetry of the setting serves as the muse for Ioannina firm G2 LAB’s transformation of the property, which comprises a pair of revitalized stone structures whose historic composition informed how new elements were integrated. “The whole complex was created with techniques dating back 100 years,” says G2 co-director and architect Giannis Efthymiadis. “The workers crafted and transferred everything by hand.”

With respect to the original architecture, G2 immersed guests into the setting with a stone and wood material palette. Olive wood pergolas complement timber, chestnut, and rattan elements, while reed ceilings and weaving ropes are balanced by abundant greenery and views of the sea. A variety of staggered outdoor spaces, from spacious terraces to dining areas and the pool, further reflect Peliva’s modern aura of tranquility. “We believe that the common shared areas make the whole complex stand out,” Efthymiadis adds. “The steep slope inspired us to design different uses in different levels, creating a fun and adventurous way to explore the private plot.” 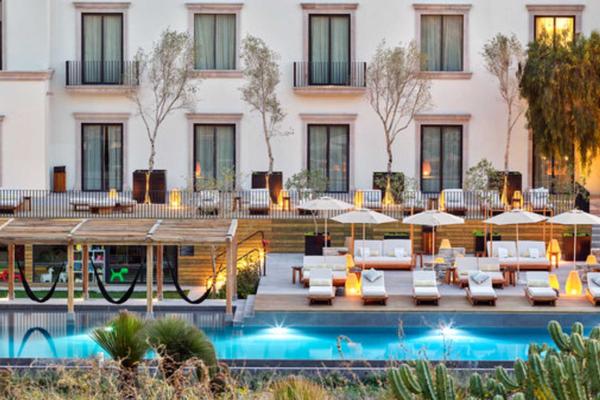